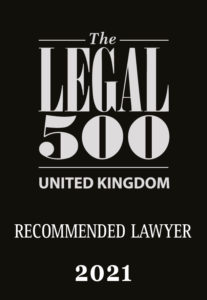 Laurence Katz is an extremely skilled and technical practitioner.

Laurence is prized for ‘paying attention to the details without losing sight of the big picture.’ He is also commended for his ability to think up novel approaches, particularly in cases with an interplay between fraud and insolvency.

Laurence is a "hands-on" practitioner and "good tactician," with a "calm and measured approach" and "excellent" attention to detail

Laurence has specialised for 25 years in commercial dispute resolution (including international arbitration under the rules of the ICC, the LCIA and UNCITRAL), fraud and asset tracing claims and insolvency litigation. He has extensive experience of acting as a supervisor solicitor on the execution of search orders and began taking appointments as a supervising solicitor in the late 1990s. Laurence’s commercial dispute resolution experience includes contractual disputes (including in relation to guarantees, business sale agreements, joint ventures, management agreements, patent licenses, distribution agreements, commercial agency contracts and restrictive covenants); interest rate swap mis-selling; shareholder and partnership disputes; directors’ and officers’ liability; and professional negligence claims against auditors, solicitors and valuers.